Woman In The Mirror 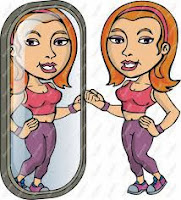 I took the liberty of personalizing the chorus to Michael Jackson’s song Man In The Mirror:

I was making a change. I was losing weight. Improving my health, my physique, and my? Wait, what was changing inside? As I stared in the mirror all I saw was the same person, the same pain.

You see, all these years of being over-weight I naively believed, if I lost the weight, it would all be better. Everything would be “fixed”. The weight was my filter. “I must have lost that job opportunity because of my weight. Once I lose the weight, they will want me to lead worship. “They” will want to hang out with me once I lose the weight because no one wants to hang with the fat girl. I will be a better Mom, Wife, Sister, Friend, etc once I lose the weight.” My weight was the enemy!! That was my truth. What a funny word to use, huh? It was not truth! It was a big ole fat lie!

The closer I got to my goal weight the more confused, disillusioned, and disheartened I became. I would stare at the woman in the mirror and wonder why I was not "fixed". “The extra weight is nearly gone. Why isn't everything better?” Of course, many things were better, but the deep stuff, the stuff in the crevices of my soul were not. I still believed so many lies about my value and myself.

I had begun to grasp grace, but what I had not grasped was who I was in Christ. I was/am valuable because I am a child of God. Psalm 8:3-8 says, “When I consider Your heavens, the work of Your fingers, The moon and the stars, which You have ordained; What is man that You take thought of him, and the son of man that You care for him? Yet You have made him (man) a little lower than angels, and You crown him with glory and majesty! You make him to rule over the works of Your hands; You have put all things under his feet, all sheep and oxen, and also the beasts of the field, the birds of the heavens and the fish of the sea, whatever passes through the paths of the seas." I have been crowned with glory and majesty! Romans 8:15-17 says, “ For you have not received a spirit of slavery leading to fear again, but you have received a spirit of adoption as sons by which we cry out, “Abba! Father!” The Spirit Himself testifies with our spirit that we are children of God, and if children, heirs also, heirs of God and fellow heirs with Christ, if indeed we suffer with Him so that we may also be glorified with Him." I am an heir of God, a joint heir with Christ! I will inherit the kingdom of heaven! Romans 8:37 says, “But in all these things we overwhelmingly conquer through Him who loved us. For I am convinced that neither death, nor life, nor angels, nor principalities, nor things present, nor things to come, nor powers,  nor height, nor depth, nor any other created thing, will be able to separate us from the love of God, which is in Christ Jesus our Lord." Nothing can separate me from the love of God! Nothing! He paid the price! Nothing can separate me!

These verses are barely scratching the surface of what scripture says about me/us. I am slowly grasping this. His thoughts are toward me. He sings over me! He LOVES me! No matter what my weight is. No matter what anyone else thinks of me, my creator says I am fearfully and wonderfully made! Now that is life/crevice changing, right there.