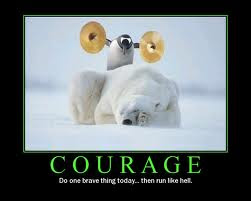 I hit another milestone today. I am less than 200 lbs. . . I weighed in at 199.5 lbs! That is a 2 lb weight loss for the week. I am thrilled with that, first, because I am under 200 now, but also because of the week I had. It wasn't tragic or epic or anything out of the ordinary really. I was really tired this week & dealt with many emotions. After looking back over the week, I realized I was fighting against depression. We received the bill from the State of Oregon this week. I had to face several emotions and deal with them rather than turn to food. After 10 months, it is still a battle of wills. Thank God, I was able to recover and fight through it. This is not a mountain I can't climb!

Last week when Jason & I were on my long run for the week, I told him that I finally found the word that sums this whole journey up. . . Courage. This week I have had several confirmations of this. I read a quote the other day, that I LOVE!! It says, "Courage is not the absence of fear, but the mastery of it," - Victor Hugo. The World English Dictionary says Courage is the power or quality of dealing with or facing danger, fear, pain, etc or to take one's courage in both hands - to nerve oneself to perform an action. I LOVE that. I was in Lexi & Kaia's school office taking care of a few things, when the secretary looked at me, congratulated me on my weight loss success, and said, "Wow that takes so much courage.” I looked at her with my eyes twinkling and said, "Yes. Yes it does.” As I turned to leave, I was beaming. That was a confirmation of what I had learned that week. This is not an easy journey. I am facing many demons, but I have found the courage to press on and win the battles so I will win the war. I implore you to find the courage to face your fears and start living life, as you never have before.
Posted by Unknown at 9:05 PM