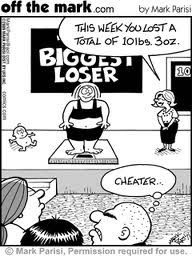 I have been watching The Biggest Loser on NBC since the first season. I have been a big fan of the show. However, I have always made a joke out of it. I would sit down in front of the TV with a bowl of ice cream and joke about how stupid these people were to sign up for the show. They were crying over how hard this all was, they were storming out of the gym angry with Jillian Michaels, they were angry that people made this a game, and all I would think is really, you didn’t know what you were signing up for? I never saw it as something that would work for me. They had professionals working with them and TV cameras following their every move. Of course it would work for them.

Then this past Spring Jillian Michaels’ launched her own show called Losing It with Jillian. She would go to a family’s home and live with them for a week. She would show them how to eat and how to exercise and then she would leave. She would come back for the big reveal 6 to 8 weeks later. Inevitably the women were losing 35 to 40 lbs and the men even more. It hit me that these people were doing it at home. They still had children, jobs, stress, etc to deal with.

During the show Jillian Michaels kept plugging her website, www.jillianmichaels.com. So one day I went out to see what it was about. They were offering a 7 day free trial so I signed up. I took the quizzes, looked through her menu plan for me, and looked through her fitness program. The first week I followed the menu closely to get a handle on what she wanted me eating. The first night of the circuit training was HELL. That’s right I said it, HELL!! I definitely had a Biggest Loser moment. I cried. I kept saying I can’t do this and my husband kept saying,”Yes you can, I know you can.” I persevered and in the first week lost 6 lbs. That was what I needed to see.

The next week I created my own menu. The program’s menu was a little too expensive for our budget and the children didn’t care for the food. It wasn’t a big deal though because I have been able to eat healthy & stay within my calorie limits. However, I found that I was starting to eat too many carbohydrates and my weight loss slowed down. The program says I am a Balanced Oxidizer. I have to have protein when I eat carbohydrates. Once I figure that out I’ve made sure to eat a protein source with every carb and the weight started to shed quickly again.

After 6 weeks of doing her circuits in my garage, so toward the end of August, I started to feel strong. I went across the street to a park that has a paved walking trail and started to walk. I felt so good that I decided to see if I could run any of it. Little did I know what that would lead to? Within a few days I was running the entire track, which is 1.25 miles. I was amazed. By October 16, 2010 I ran my first 5K.

If you are looking for some help I would encourage you to check out www.jillianmichaels.com. The cost is minimal compared to many other programs and it really is doable. I have been to reunions, birthday parties, weekends away, etc and have never felt deprived. I have given myself the grace I’ve needed to get through those functions. I have also allowed myself cheat days. I believe that this time I’m learning a whole new way of living with food and not just dieting.
Posted by Unknown at 12:34 PM