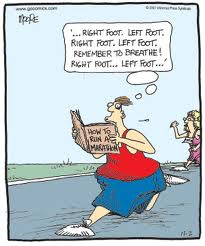 Yesterday I ran a little over 5 miles. FOR THE FIRST TIME EVER!!! When we started out, I explained to the group that it was our 5 mile night. As you can imagine they were overjoyed! :) When we began nearing the end of our fourth mile I started to hesitate. I threw out that it was getting too dark or too cold or . . . . by this point the other runners were telling me that we were going to keep going. They said they finally had their heads wrapped around it. As we started on the fifth mile I wasn’t sure if I could do it. My body was starting to hurt & I was slowing down quite a bit, but I pushed through. Somewhere around 4.25 miles I started to feel good, really good. My legs wanted to run faster, my breathing was good, I wasn’t cold. . . I began running faster. In fact, the entire fifth mile felt really good. I mentioned this aloud and everyone said they were feeling the same thing. We decided it was the “runner’s high” we’ve heard so much about. We felt like we could go more than five miles but didn’t want to risk hurting our bodies. I can’t explain the feeling of delight and the sense of satisfaction I felt when we finished. Remember, I’ve never pushed my body before. This is all new to me so I’m constantly amazed.
Thursday we run intervals. Yeah!! It’s going to be a mental game for sure. Saturday we run 6 miles. I’m really excited to see how that feels. I’ll let you know all about it.
Posted by Unknown at 1:52 PM