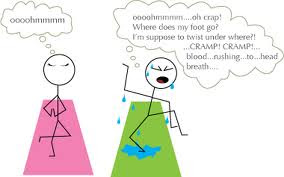 I visited my brother and his family this past weekend in Puyallup, WA. As we settled into visiting, after the children were in bed, my sister-in-law, Amanda, asked if I wanted to join her for Hot Yoga the next morning. I had a little bit of panic run through me. I said I would try new things this year and this would definitely be new. I agreed and then she began telling me what I needed to do to prepare for it. She told me I needed to begin hydrating and she wanted to make sure I had appropriate clothing. My eyes got bigger and bigger as she talked more about this Hot Yoga stuff.

The next morning we made our way to the Yoga studio. It was a cold and rainy day. As we approached the studio a man dressed in nothing but soaking wet shorts and carrying a towel came out to stand in the cool air. I was a little stunned by this because I did not think the building looked big enough for a pool and it was too cold to be standing outside like that. Amanda giggled and explained he just came out of a hot yoga class. I still couldn't figure out why his shorts were so wet.

As we stepped into a very warm lobby I noticed a class had just let out and women were sitting all over the lobby area. They were equally as wet as the gentleman I had just seen outside and it was all becoming clear. The instructor greeted us from the front desk with a big toothy grin. Her pig tails were dripping as she talked to the women in the room about the class that had just finished. Everyone sitting around the room was acting as if they had just had a near death experience. Their breathing was heavy, their faces were pale and not one of them looked well. At this point I was getting concerned about what I agreed to. Amanda reminded me that if I felt like I needed to leave the room during the class I could. She also reminded me if I left the room I couldn't come back in so she recommended I just rest on the mat and then rejoin the class. All of a sudden I heard a commotion coming from the hallway. I glanced over and saw a woman kneeling on the floor with her head in the large black garbage can. What I heard was not good. YUCK!!

I approached the reception desk to give the instructor my forms and she jokingly asked me if I was still going to try the class out after seeing that. I told her she could take the money, I had my running shoes on and was leaving. Hahahaha! Truthfully the woman throwing up did not freak me out as much as the people sitting around the room looking like death warmed over. YIKES!

The Hot Yoga room was hot, but not quite like I was expecting. I thought, "I just might be able to do this." The class began and I worked really hard on trying to hold the poses. About half way through the class I began getting concerned because I still wasn't sweating the way I thought I should be and the way others were. I thought, "Maybe I don't sweat like other people. Maybe I should see a doctor about this." All of a sudden, the flood gates were opened and the sweat started rolling off of me like Niagara Falls. Before I knew it my clothing looked like I had taken a dip in a hot tub. I definitely had to take some breaks on the mat. What did not feel as hot as I thought it was going to earlier now felt like it was suffocating me. Allowing myself short breaks really helped. I began getting a migraine toward the end of the class so I left about 3 minutes before the end. I was concerned I would not be able to function the rest of the day because of it. The instructor told me she had the same thing happen the first time she did Hot Yoga. She explained the first few times might effect me like that, but soon I would feel amazing every time I finished. I did feel weird the rest of the day, but it was nothing I could not handle. It felt so good to know quite a few toxins were released that day.

I really enjoyed the class. I can see all the benefits and would love to do it a few times a week. I still cannot get over how much I sweat. It was CRAZY!! Thank you Amanda for introducing me to Hot Yoga!!!
Posted by Unknown at 9:38 PM