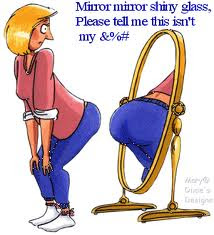 I received this email from http://www.jillianmichaels.com/ today and thought it would be good to share.  I received this same email at the beginning of my weight loss journey and it really encouraged me to keep going.  I believe education is one key to success.  The more you know the more you want to treat your body better.

Always Hungry? Maybe This Hormone Is Out of Whack


I've worked with many people who have told me that no matter how much they eat, they're still hungry. They can scarf down half a pizza plus dessert and still feel ravenous afterward. Does this sound familiar? If so, it's possible that a condition called leptin resistance is at least partly to blame.

To understand leptin resistance, you first have to understand the role the hormone leptin plays in your metabolism. When you've eaten a meal, the fat cells throughout your body release leptin, which travels to the hypothalamus, the part of your brain that helps regulate appetite. There, it switches off neuropeptide Y — a protein that tells your brain you're hungry — and switches on appetite-suppressing signals. In other words, it gives your brain the message to stop being hungry and start burning calories.

You'd think, then, that low levels of leptin would be the cause of an unstoppable appetite, but that's not necessarily the case. Some research indicates that many people who are overweight actually have very high levels of leptin. How could this be? Well, the more fat you have, the more leptin you produce. And when the body continually cranks out excess levels of leptin in response to overeating, the receptors for leptin in the hypothalamus can start to get worn out and no longer recognize it. People with leptin resistance have high circulating levels of leptin, but the receptors are "deaf" to it, so it can't shut off appetite or stimulate your metabolism.

This vicious circle is similar to what happens when a person develops resistance to insulin, the hormone that allows your cells to use the glucose in your blood. (Insulin resistance can cause high blood glucose levels and eventually lead to diabetes.) In fact, the two conditions often go hand in hand, and research suggests that leptin resistance may be reversed in the same way that insulin resistance can be reversed — by exercising, eating right, and losing weight.

JILLIAN'S TIP OF THE DAY

The Role of Fat

You probably don't think of fat as an active part of your body, do you? Although researchers used to believe that fat cells were just big blobs of yuck waiting to get bigger or smaller, they now know that fat is an enormous endocrine gland, actively producing and reacting to hormones. The less fat you have, the less likely you are to overload your leptin receptors and deafen them to what leptin is trying to tell them — one more reason that fat-burning exercise is crucial for a healthy hormone balance!
Posted by Unknown at 8:22 AM